EITC is better than the Minimum Wage

Suggesting that federal policy addressing low-wage work and low-income families has somehow failed because the minimum wage has not kept pace with inflation ignores the fact that we have moved away from a focus on the minimum wage — a policy with many flaws — and toward the earned-income tax credit.  We shouldn’t be asking simply how much the real minimum wage has changed, but rather how much the combined income floor generated by the two policies has changed.

To provide an example, the blue line in the figure below shows the wages received by a single adult worker earning the minimum wage and working full time throughout the year. This can be interpreted as the income floor established by the minimum wage. The red line shows the level of family income when the earned-income tax credit for a family with two children is added (all in 2012 dollars). The lower line illustrates the income consequences of the real decline in the minimum wage. But the upper line shows that, because of the sharp increase in the generosity of the earned-income tax credit, the combined effect of the two policies is that the real income of this family is as high or higher than it was in past decades — when the real minimum wage was relatively high — and much higher than it was in most of the intervening years. 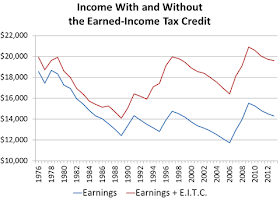 Nonetheless, there are important differences between the earned-income tax credit and the minimum wage. The fundamental difference is that the earned-income tax credit aims benefits at low-income families with children, rather than simply low-wage workers. This is in large part its virtue, and it makes a lot more sense than the minimum wage’s focus on low-wage workers. Do we really care if a low-wage teenager in a middle-class family makes an extra dollar an hour?  Economists of all persuasions in the minimum-wage debate agree that mandated wage floors do a bad job of directing benefits to low-income families.  This is confirmed in recent research by my graduate student Sam Lundstrom, calculating who would be affected by increasing the current federal minimum to $8.25 from $7.25.  He finds that only 21.3 percent of the affected workers would be in poor families, while 30.9 percent would be in families with incomes more than three times the poverty line.﻿
Greg Mankiw at 9:01 AM
Share
‹
›
Home
View web version